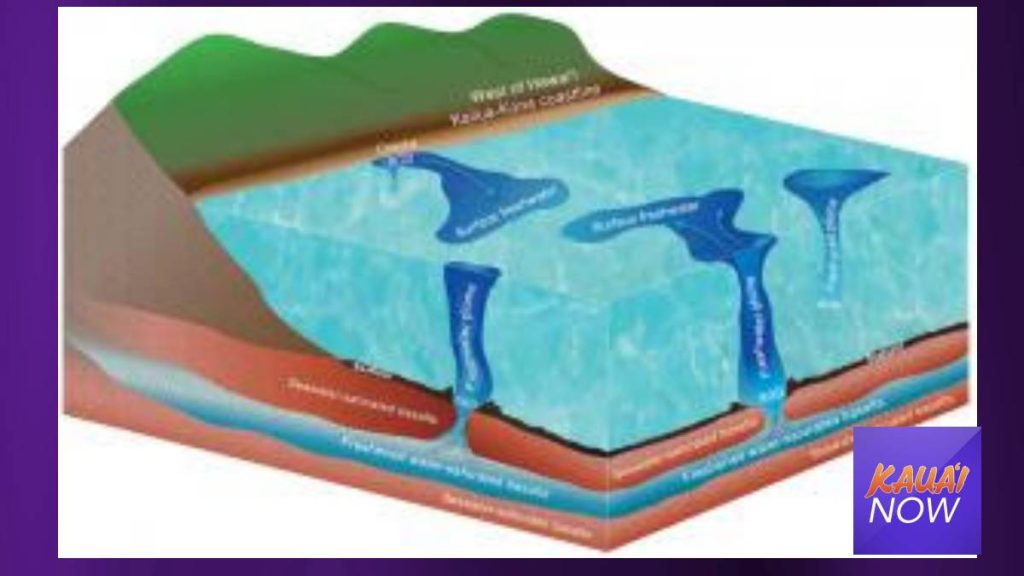 The first imaging of substantial freshwater plumes west of Hawai‘i Island may help water planners to optimize sustainable yields and aquifer storage calculations. University of Hawai‘i at Mānoa researchers demonstrated a new method to detect freshwater plumes between the seafloor and ocean surface in a study recently published in Geophysical Research Letters.

The research, supported by the Hawai‘i EPSCoR ‘Ike Wai project, is the first to demonstrate that surface-towed marine controlled-source electromagnetic (CSEM) imaging can be used to map oceanic freshwater plumes in high-resolution. It is an extension of the groundbreaking discovery of freshwater beneath the seafloor in 2020. Both are important findings in a world facing climate change, where freshwater is vital for preserving public health, agricultural yields, economic strategies, and ecosystem functions.

While the CSEM method has been used to detect the presence of resistive targets such as oil, gas and freshwater beneath the seafloor, this study is the first time CSEM was applied to image freshwater in the ocean water column, according to ‘Ike Wai research affiliate faculty Eric Attias, who led the study.

“This study has profound implications for oceanography, hydrogeology and ocean processes that affect biogeochemical cycles in coastal waters worldwide,” said Attias. “Using CSEM, we now can estimate the volumes of freshwater emanating to the water column. This is indicative of the renewability of Hawai‘i’s submarine freshwater system.”

Submarine groundwater discharge (SGD), the leaking of groundwater from a coastal aquifer into the ocean, is a key process, providing a water source for people, and supporting sea life such as fish and algae. According to UH Mānoa Department of Earth Sciences Associate Professor and study co-author Henrietta Dulai, the location of offshore springs is extremely hard to predict because of the unknown underlying geology and groundwater conduits.

“The flux of such high volumes of nutrient-rich, low salinity groundwater to the ocean has great significance for chemical budgets and providing nutrients for offshore food webs,” said Dulai. “It is great to have a method that can pinpoint discharge locations and plumes as it opens up new opportunities to sample and identify the age of the water, its origin, chemical composition, and its significance for marine ecosystems in this otherwise oligotrophic (relatively low in plant nutrients and containing abundant oxygen in the deeper parts) ocean.”

This study included electromagnetic data driven 2D CSEM inversion, resistivity-to-salinity calculation, and freshwater plume volumetric estimation. Through the use of CSEM, the research team was able to image surface freshwater bodies and multiple large-scale freshwater plumes that contained up to 87% freshwater offshore Hawai‘i Island. The results imply that at the study site substantial volumes of freshwater are present in the area between the seafloor and the ocean’s surface. A conservative estimate for one of the plumes suggests 10,720 cubic meters or approximately the volume of four Olympic-sized swimming pools.

The methodology used in this study can be applied to coastal areas worldwide, thus improving future hydrogeological models by incorporating offshore SGD and optimizing sustainable yields and storage calculations. Attias plans to extend the novel use of CSEM to further prove its application in imaging freshwater at other volcanic islands around the globe.

Attias will present his work at the International Tropical Island Water Conference taking place April 12–15, 2021. Hosted by the UH Water Resources Research Center and Hawai‘i EPSCoR, this conference brings together water scientists, water managers and community members from around the world to share cutting-edge research and learn from each other’s experiences managing and understanding water resources across a broad range of tropical island settings.