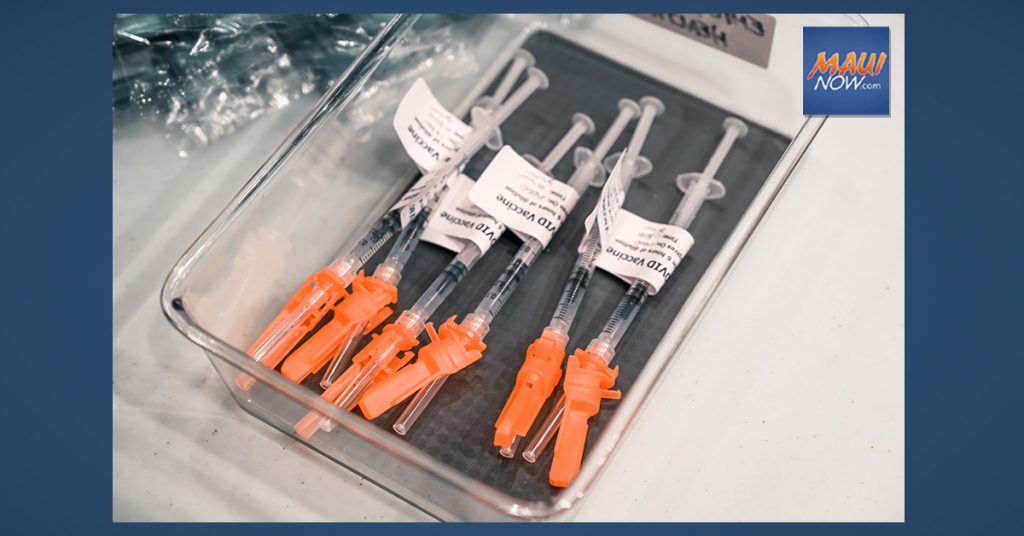 An estimated 1,386 doses of Pfizer vaccine were compromised and ultimately discarded on Maui after it was discovered that a refrigerator door did not seal properly.

The incident occurred on Monday and the refrigerator is currently being repaired; but future doses will be stored in an alternative location, according to Maui Health.

“Our team immediately contacted Pfizer and it was determined that the vials would need to be removed from clinic use and discarded appropriately,” said Tracy Dallarda, spokesperson for Maui Health / Maui Memorial Medical Center, noting that the Department of Health and partners at the Healthcare Association of Hawaiʻi were also notified.

“We appreciate Maui Health for taking immediate corrective action, and for being transparent about what happened. We recognize that each vaccine has different storage requirements and setting up large vaccination operations from scratch is a challenge for any health care provider. We know the Maui Health team is dedicated to protecting the people of Maui and are working to vaccinate their community as quickly as possible,” said Hilton Raethel, president and CEO, HAH.

The state Department of Health confirmed that they were notified of the Maui incident today. The vaccine loss is the largest to occur in the state to date, although a total of 2,400 doses have been lost since vaccine administration first began. The remaining 1,014 doses were lost in separate incidents around the state since mid-December, according to the DOH.

“The vast majority, or 881, of those 1,014 doses were lost when a vial or syringe was broken. Other doses were not administered after a vial had been opened or vaccine had been drawn into a syringe but not administered,” according to DOH spokesperson Brooks Baehr.

The 1,000+ doses lost in incidents around the state represent less than .2% of doses administered in Hawai’i. “In other words, fewer than two doses per 1,000 vaccines administered had been lost prior to this unfortunate incident on Maui,” said Baehr.

Maui Health primarily administers the Pfizer vaccine, which needs to be stored at an ultra-low temperature. As the hospital site was being launched, an ultra-low freezer was donated by the University of Hawaiʻi Maui College for safe storage at proper temperatures. According to Maui Health, the vaccine is securely locked in the ultra-low freezer until it needs to be transferred to a refrigerator where it is thawed and prepared for the week’s clinic appointments.

Meantime, Maui Health maintains that there is sufficient supply of the vaccine to continue its vaccination efforts and all current and future appointments will remain as scheduled.

“We want to assure our community that there is no disruption of our vaccination efforts and, in fact, we are working on expanding those efforts that include increasing clinic hours and hosting pop-ups throughout the island,” said Mike Rembis, Maui Health CEO.

According to Maui Health, COVID-19 vaccination clinics continue this week with thousands of appointments scheduled at the Maui Memorial Medical Center Main Lobby clinic and their Kīhei clinic.

To date, Maui Health has administered more than 25,000 vaccines to Maui residents and will be on Lānaʻi this Saturday to further assist with their vaccination efforts. “Maui Health will also be announcing a new, expanded site soon which will allow for a further increase in vaccination efforts,” said Dallarda.