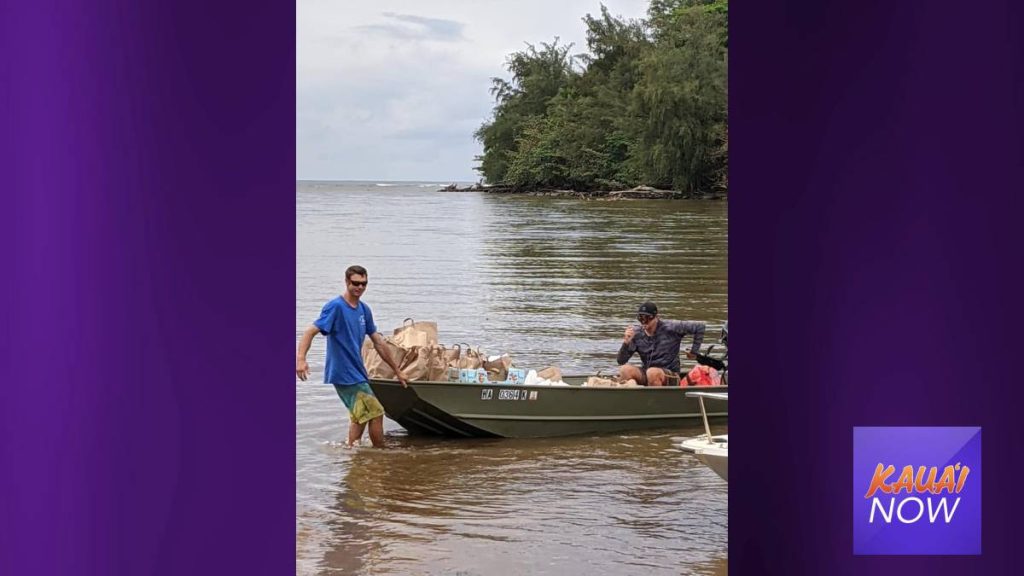 Kaua‘i residents have stepped up to take care of their own after a landslide, caused by severe weather, covered Kūhiō Highway at Hanalei Hill,  cutting off the North Shore from the rest of the island last week.

Over the course of two days, volunteers with Mālama Kaua‘i were able to deliver approximately 180 produce bags put together by four local farmers. A volunteer captained a boat to get the goods to Hanalei, Hā‘ena and Wainiha through the flood waters.

“We’re so lucky to have a community that comes together,” said Rose Hayes, a project manager with Mālama Kaua‘i.

On Thursday, March 11, a landslide by Hanalei Hill covered Kūhiō Highway, blocking residents from leaving the North Shore. The hope, according to Hawai‘i Department of Transportation, is clear one lane for emergency travel by Tuesday, March 16. However, HDOT officials believe it will take three months to fully clear the landslide from the roadway.

This is not the first time the North Shore communities have been cut off from the rest of the island. In 2018, landslides from flooding and prolonged road repairs limited access to Haena and Wainiha to regular traffic for over a year. Hanalei was still accessible after that episode.

Hayes, who also lives on the North Shore, said the current situation is not has bad as it was two years ago, when access was blocked for 10 days and the communities were under a convoy system for more than a year.

“In the immediate period of an emergency, it takes time to mobilize (county and state assistance), Hayes explained. “In those early hours, it’s up to the community.”

At this point, Hayes said, they know who takes care of food, medical services, who cooks food, etc.

“Everyone places to their strengths,” she explained.

North Shore residents can order food from Mālama Kaua‘i here. Volunteers will be back doing deliveries on March 18.