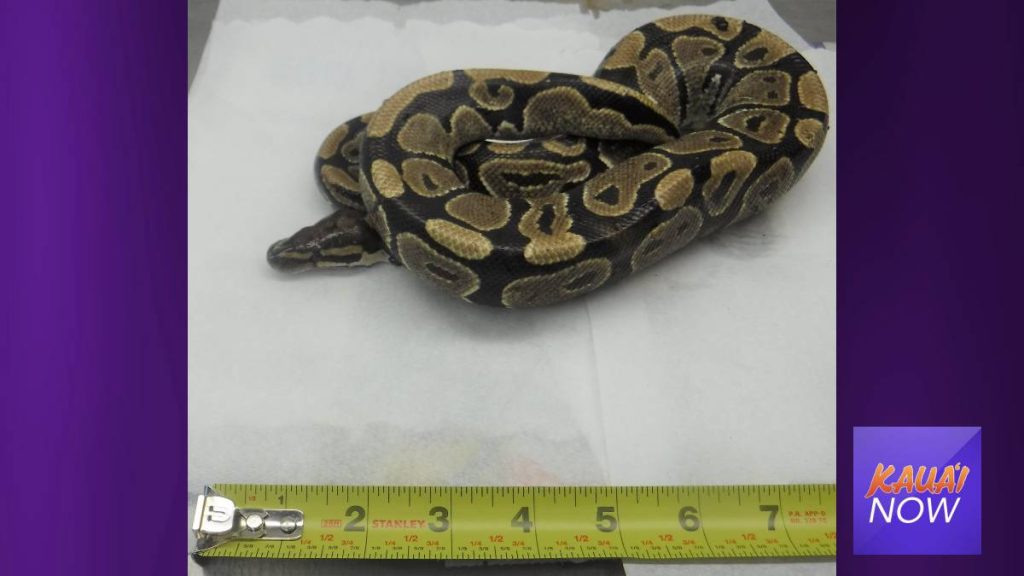 The Honolulu Police Department captured a live ball python in a residential neighborhood in Aiea earlier this week.

A neighbor contacted HPD after noticing the snake on a nearby property at approximately 10 am Monday. Responding officers covered the three-foot-long snake with a trash can and contacted inspectors from the Hawai‘i Department of Agriculture (HDOA) who took custody of the animal. It was subsequently identified as a non-venomous ball python and is being safeguarded at HDOA’s Plant Quarantine Branch. The incident remains under investigation.

Ball pythons are common in the pet trade on the mainland. They are native to Western and West-Central Africa, and are constrictors that subdue prey by coiling around it, causing death by suffocation. Their diet usually consists of small mammals and birds. They may grow up to six feet long.

Snakes have no natural predators in Hawai‘i and pose a serious threat to the environment. Many species also prey on birds and their eggs, increasing the threat to endangered native species. Large snakes can also be a danger to small pets or even the general public.

The ball python wasn’t the only unwelcome reptilian visitor to Honolulu this week.

On Tuesday afternoon, a Waimanalo woman who lives on Kumuhau Street contacted HPD to report an iguana in her backyard. Responding officers were able to contain the animal and called HDOA inspectors who safely secured it.

The iguana measured approximately three-and-a-half feet from its nose to the tip of its tail. Like the ball python, the animal is also being safeguarded at PQB. Although iguanas are known to be established in some areas on O‘ahu, it is illegal to import, possess or transport iguanas in the islands.

When fully grown, iguanas may reach up to six feet in length. Their tails are quite powerful, acting as dangerous weapons in fending off enemies. Iguanas are native to central Mexico and South America, and are typically vegetarians but are also known to disturb bird nestlings and feed on eggs.

Persons possessing illegal animals are subject to severe penalties, including fines of up to $200,000 and up to three years in prison. Individuals who see or know of illegal animals in Hawai‘i are encouraged to contact the State’s toll-free PEST HOTLINE at 643-PEST (7378) or turn the animals in under the State’s Amnesty Program.