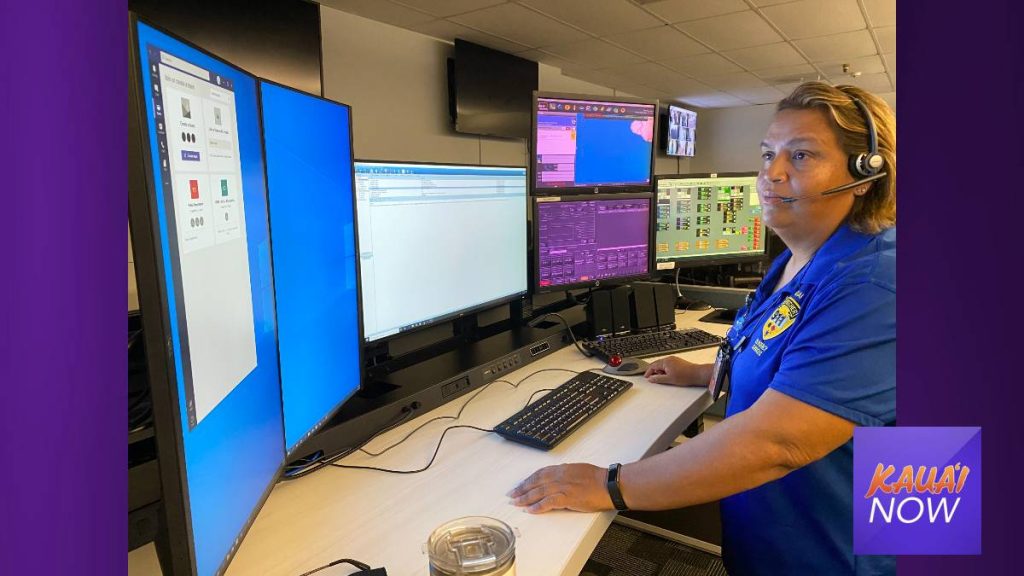 Kauaʽi Police Department dispatchers moved into a newly renovated Communications Center at the Līhuʿe Headquarters on Wednesday. For the past three months, as renovations and upgrades were underway, dispatchers worked from a temporary location while continuing to service all calls uninterrupted through 911 and the non-emergency line.

The $178,000 renovation, made possible by funds from the State 911 Board, included new flooring, new dispatcher consoles, a fresh coat of paint and a new video wall system.

“This renovation was much needed and I’m so grateful to everyone who worked on getting it completed as quickly as possible; they did a great job,” said Communications Center Sgt. Stacy Perreira. “I am also thankful to those who made the funding possible and, most importantly, to the dispatchers who were able to work seamlessly throughout this transition.”

KPD has 19 full time dispatchers who answer calls 24 hours a day, seven days a week. The dispatchers’ individual years of service range from more than 23 years to around six months.

KPD’s Communications Section is the fourth largest Public Safety Answering Point (PSAP) in the state and serves as the PSAP for all Emergency Service Calls on Kauaʽi, including Police, Fire and Medics. The Communications Center is a consolidated dispatch center that also responds to incoming calls of service related to Lifeguards, Park Rangers, the Pacific Missile Range Facility and the Department of Land and Natural Resources.

“During natural disasters, we are the hub of all calls,” said Perriera. “It’s a job that requires skill and an ability to communicate with a wide range of people, some of whom are experiencing the most critical and traumatic moment of their lives.”

The public is encouraged to call the non-emergency line, 241-1711, for all inquiries that are not fire or medical emergencies, or crimes in progress.