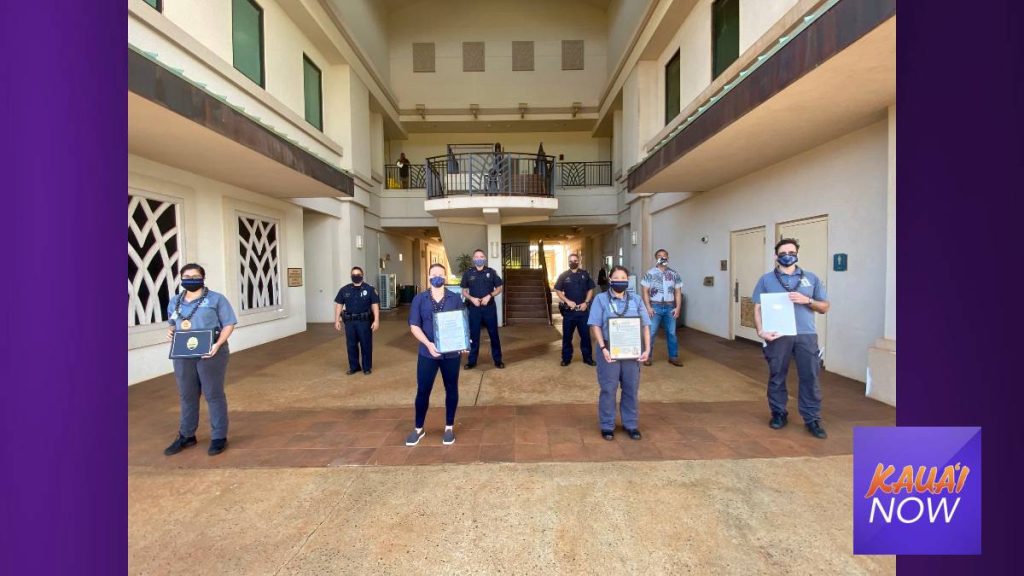 KPD’s crime scene group includes Stephanie Regan, Michaelyn Etrata, Alicia Quintana and Christian Vlautin, who were each given an honorary certificate presented by Chief of Police Todd G. Raybuck. Collectively, they were also given a proclamation from the Kauaʽi County Council presented by Chief Raybuck and another from the County of Kauaʽi, which was presented by Mayor Derek S.K. Kawakami.

“Our criminalists are some of our many unsung heroes at KPD,” said Investigative Services Bureau Captain Paul Applegate. “They are responsible for helping solve our complex crimes. They are often among the first individuals to arrive on scene and the last to leave. They are also known to put in additional time after hours and on weekends in order to bring justice to a case as quickly as possible.”

Forensic science is important to the investigation of crimes and identifies the guilty while exonerating the innocent. The individuals in KPD’s Crime Scene and Laboratory Section identify evidence from crime scenes that can provide critical information toward solving cases like burglaries and homicides.

The quality of forensic analysis has taken enormous strides in recent years due to the hard work of practitioners, local and federal legislation, as well as the dedication of national committees, some of which KPD’s forensic scientists participate in.

“We recognize the significant importance of forensic science on the criminal justice system and we acknowledge the increasing demands that are placed on our team in order to keep up with the high quality of analysis we encounter today,” said Applegate. “We extend an overwhelming amount of gratitude to them for all of the work they do not only for our department but for our island.”

National Forensic Science Week 2020 takes place this week in honor of the scientific and technical professionals who serve the nation’s communities.