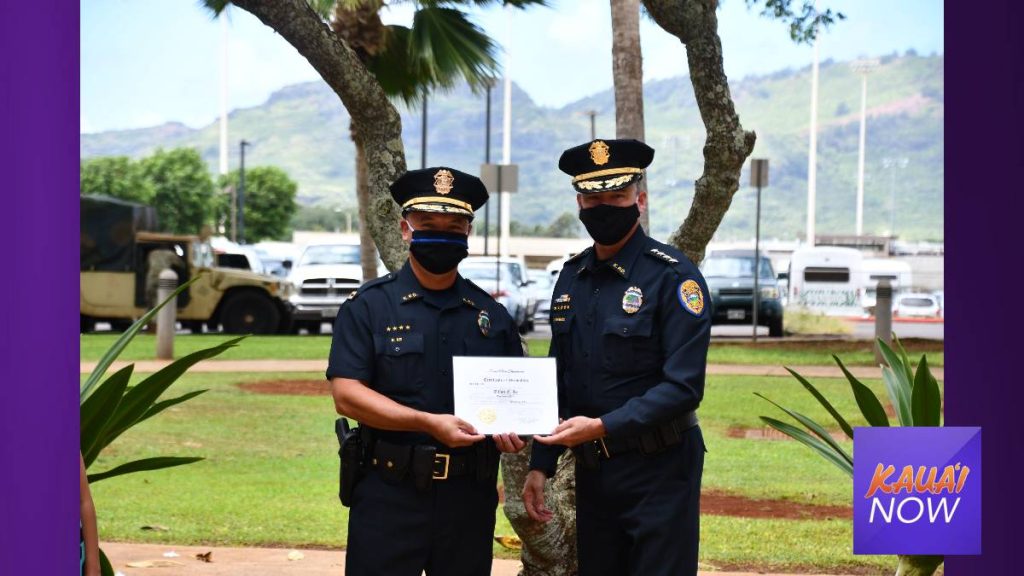 The Kaua‘i Police Department (KPD) held a special ceremony last week to honor the promotion of Elliott “Kalani” Ke to the rank of Assistant Chief of the Administrative & Technical Bureau.

“I am grateful and honored to receive this promotion,” said Ke. “I am very excited about my new assignment and I am looking forward to working closely with the staff and personnel in continuing to advance the department.”

Ke has a bachelor’s degree in criminal justice from Bethel University. He is also a 2015 graduate of the Federal Bureau of Investigation’s National Academy, and in 2008 held the honors of KPD’s Employee of the Year, Top Cop and Hawaiʽi State Law Enforcement Officials Association’s Officer of the Year.

“I believe that Kalani is well-suited for this honorable position, as he has proven himself to be committed, diligent and one of the most hard-working individuals I know. He’s almost always the first one in the office and the last one to leave,” said Chief of Police Todd G. Raybuck. “I know that he will accomplish many great things and I look forward to his achievements that I am confident will enhance the department’s role within the community.”

As head of the Administrative & Technical Bureau, Ke will oversee the team and its critical support functions for the police department that include recruiting and hiring, training, payroll, procurement, contract and grant management, police records, issuing equipment and supplies, firearms registration, evidence control, community relations and school resource officers.

A small and socially distanced promotion ceremony was held for Ke last week at KPD Līhuʽe Headquarters and his badge was pinned on by family.