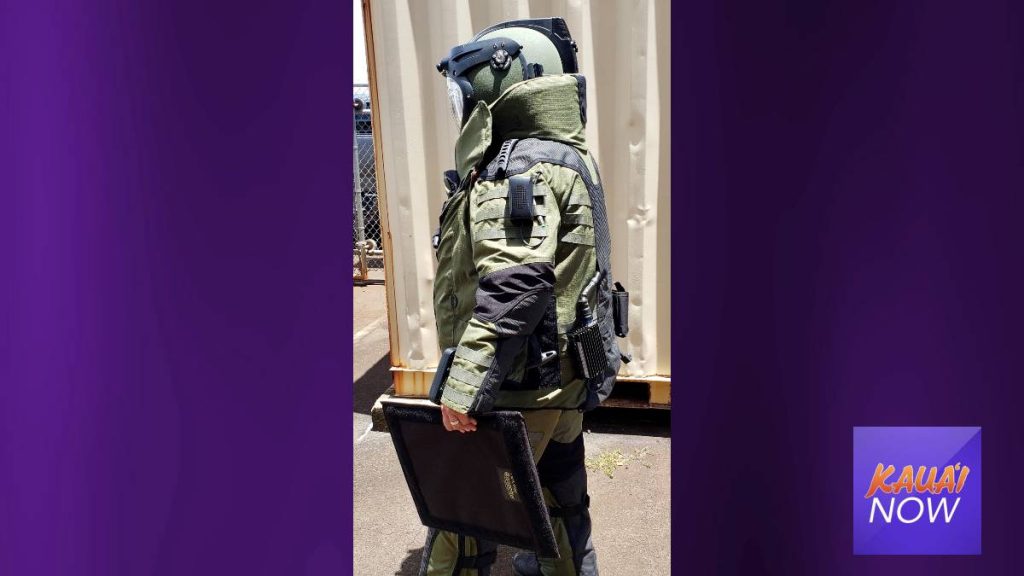 As part of the HIBS, specially trained officers from KPD’s Investigative Services Bureau have taken on the advanced task of becoming certified bomb technicians. They are now responsible for responding to all accidental explosions, bombings, explosives, military ordnances and other related hazardous materials on the island.

“I am so grateful to our officers for taking on this extraordinary task and for being willing to risk their lives to keep the community protected, as well as their fellow officers and first responders, in the event of an emergency,” said Assistant Chief Bryson Ponce.

KPD’s bomb technicians have undergone extensive training on how to render an explosive devise safe, as well as to properly handle, remove and dispose of said device.

“Having these skilled officers on hand and on island allows for greater public and officer safety, enhanced explosive-related investigations and quicker response times to threats and emergencies in order to allow normal operations of the general public to resume,” KPD stated in a press release Friday.

Prior to becoming bomb technicians, the officers were required to complete a Public Safety Bomb Technician course at the Hazardous Devices School at Redstone Arsenal in Alabama where they underwent many weeks of intense training.

In June, following completion of all bomb technician training and certification, HIBS was officially accredited by the US Department of Justice’s Federal Bureau of Investigations’ (FBI) Hazardous Devices School for meeting all of the National Bomb Squad Commanders Advisory Board’s requirements.

The officers will now be required to retain their certification with active duty status that includes maintaining physical and operational requirements and pursuing ongoing training.

Kaua‘i, Maui and Hawai‘i island police departments have a combined population jurisdiction of some 440,000 residents that traditionally includes millions of visitors each year. By working together since 2016, the police departments, along with the FBI Honolulu Field Office Bomb Technician Program and the State of Hawai‘i Department of Defense, created this bomb squad to protect these neighbor island communities, as Honolulu Police Department already its own.

“Fortunately, Kaua‘i remains a safe place to live and we don’t have to routinely worry about bomb threats. That said, having a bomb squad on our island in case of any emergency, including when people find unexploded ordnances washed up on our beaches, provides us with an added layer of protection,” said Ponce. “I want to thank Hawai‘i Police Department and Maui Police Department, as well as the Honolulu Police Department, State of Hawai‘i Department of Defense, Hawai‘i Homeland Security and the Honolulu Division FBI for this team effort. I also want to thank our officers again for their commitment. Having closely worked with them for many years and having seen their ability to lead the way with this new program, I am confident that our community is in good hands.”

KPD reminds residents that if they find an object, such as an unexploded ordnance that has washed up on the shore, to not disturb it and to call dispatch at 808-241-1711 as soon as possible.