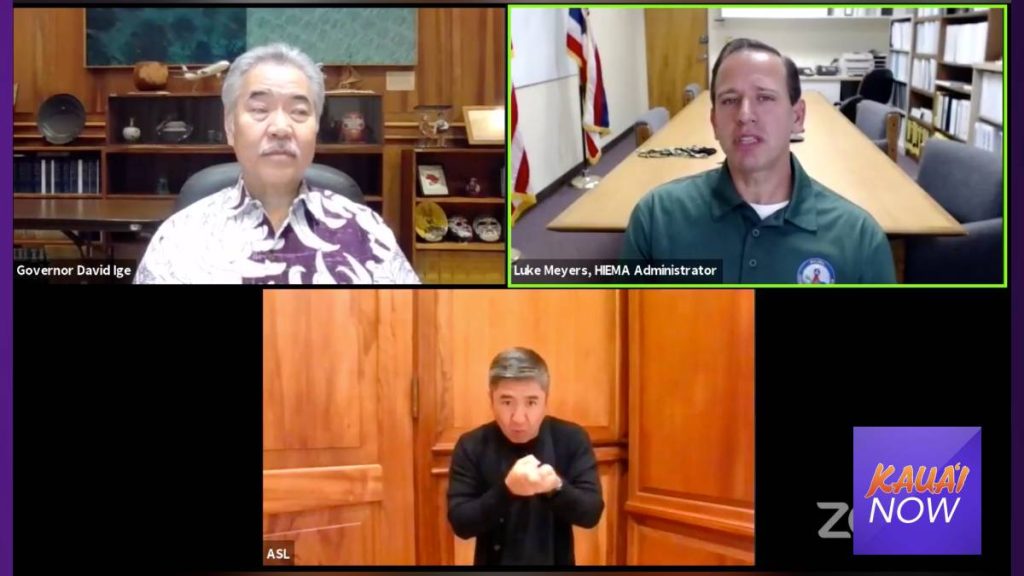 State and local officials are monitoring the first tropical storm of hurricane season as it churns closer to the Hawaiian Islands.

“Even though we’re dealing with the COVID-19 pandemic, we’re also in the middle of hurricane season, Ige said.

Hurricane season runs from June 1 to Nov. 30 for the central pacific. Tropical Storm Douglas is currently being monitored by state and weather experts.

About 2,035 miles east of Hilo, Douglas is expected to become a hurricane later tonight or Wednesday, according to a public advisory from the National Hurricane Center issued at 11 a.m.

As soon as the storm crosses 140 degrees west into the central pacific zone, the state, counties and National Weather Service partners will hold a teleconference about the potential impacts from the storm.

Meyers said they anticipate the weather event to cross into the central pacific over the 140-degree west mark sometime on Friday. When that occurs, the state has about five days before it reaches the Hawaiian Islands.

“Currently, the track brings it very close to the islands,” Meyers said. “We do expect the storm to increase in size, maybe even into a major hurricane before it weakens.”

At this point, officials will continue to monitor the storm and get ready with its partners.

“We do anticipate some impacts from the storm as we get into the weekend and into early next week,” Meyers said.

During the video, Meyers also addressed six calls to action to residents this hurricane season. The first is knowing the hazards “where you live, work and play.” The second is to sign up for county and state alerts; third is to develop an emergency plan; fourth, have a 14-day supply kit that includes face masks and hand sanitizer; fifth, consider flood or hurricane insurance; and sixth, consider construction mitigating options for homes and businesses.

With new cases of COVID-19 developing daily, shelters will incorporate physical distancing at those locations as well as temperature checks and screening for symptoms of the virus. All shelters are run by the counties along with the American Red Cross.

“We do always recommend to shelter where they’re (residents) most comfortable before going to a public shelter,” Meyers said.