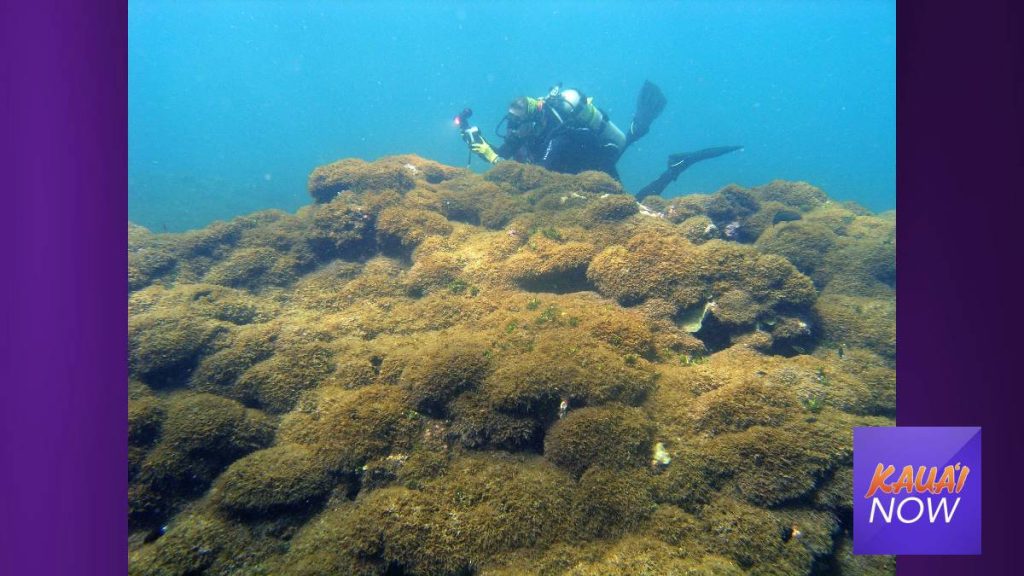 A fast-growing species of algae was discovered to be infesting Hawai‘i’s northwestern waters.

A team of researchers from the University of Hawaiʻi, Western Australian Herbarium, College of Charleston and National Oceanic and Atmospheric Administration (NOAA) identified the algae in Papahānaumokuākea Marine National Monument. Its presence may be a major threat to coral reefs and the sealife reefs support.

“I think this is a warning of the kinds of changes that are to come for the northwestern Hawaiian Islands,” said Alison Sherwood, UH Mānoa College of Natural Sciences Interim Associate Dean and Professor of Botany. “We have, not until now, seen a major issue like this where we have a nuisance species that’s come in and made such profound changes over a short period of time to the reefs.”

The alga was first detected by NOAA divers in 2016. A visit to the same area last year revealed the species is now growing in mats that are up to several thousand square meters each at Pearl and Hermes Atoll.

The alga grows from the sea surface to at least 70 feet in depth. Researchers are worried because the algae species forms mats that are almost eight inches thick that can smother reefs and the corals, native algae and other organisms. It also has a “tumbleweed-like” growth and appears to easily detach and spread.

Researchers are characterizing the new species as ‘nuisance’ rather than ‘invasive’ because they have not confirmed it as being introduced from another region,” according to a UH press release.

“Researchers are definitely concerned about this alga,” Sherwood said. “This is something that’s been seen, just in the sheer abundance of it at Pearl and Hermes Atoll. It’s covering the native reef, and what it’s doing when it does that is covering over the native species and genera of corals that live there.”

Researchers will conduct mapping and molecular analyses and will develop mitigation strategies to assist in the development of appropriate management recommendations.

The findings were featured in a PLOS ONE journal article.