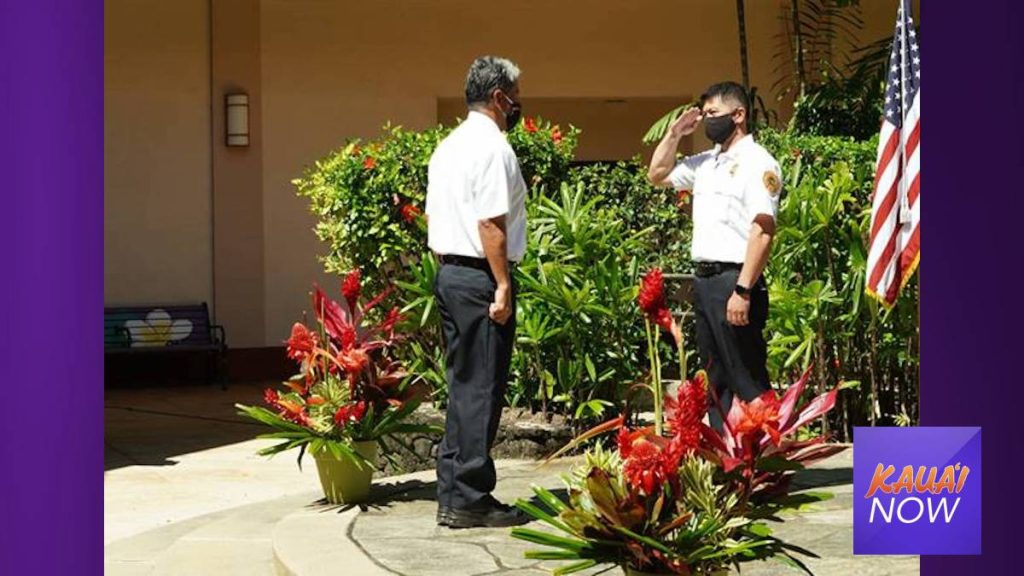 In his remarks, Acting Chief Kanoho expressed his honor to serve as acting fire chief for the past few months and thanked the Kaua‘i Fire Commission for the opportunity.

“It has been and will always be an honor for me to serve every one of the members of the Kaua‘i Fire Department,” Kanoho said. “I’m looking forward to assisting Chief Goble in working with all of you in the coming years.”

Kawakami paid tribute to the first responders in the audience and welcomed Chief Goble to the County of Kaua‘i ‘ohana.

“You have our word that we will do our best to make your stay and your career and your service here comfortable,” said Mayor Kawakami. “You have inherited one of the very best group of first responders, and I look forward to working with you on our team.”

Honorable Judge Randal G. Valenciano performed the swearing-in of the oath of office, followed by the ceremonial pinning of the badge presented to Chief Goble.

After introducing himself simply as “Steve,” Chief Goble was humbled and thankful for the opportunity to serve the island.

“In my heart of hearts, I am a firefighter and will always be a firefighter,” said Chief Goble. “My role is to serve all of you and making sure I am a good steward for the community.”

Chief Goble retired in January 2016 from Henderson Fire Department after serving for over 25 years and was most recently the Executive Director of Emergency Management for the Venetian Resort in Las Vegas.

During his tenure as Fire Chief for the City of Henderson, the Henderson Fire Department consisted of more than 250 full-time personnel operating out of nine fire stations covering more than 105 square miles. The department responded to over 28,000 calls for service to its population of more than 290,000 and 600,000 annual visitors.

Besides his roles as Fire Chief for the City of Henderson and Executive Director of Emergency Management for the Venetian Resort, Chief Goble has served as a Deputy Fire Chief, Division Chief of Special Operations, and Fire Captain.

He holds a Masters of Arts in Homeland Security and Defense from Naval Postgraduate School, a Bachelor of Science in Public Safety Administration from Grand Canyon University, and an Associate of Science in Fire Service Management from the College of Southern Nevada.