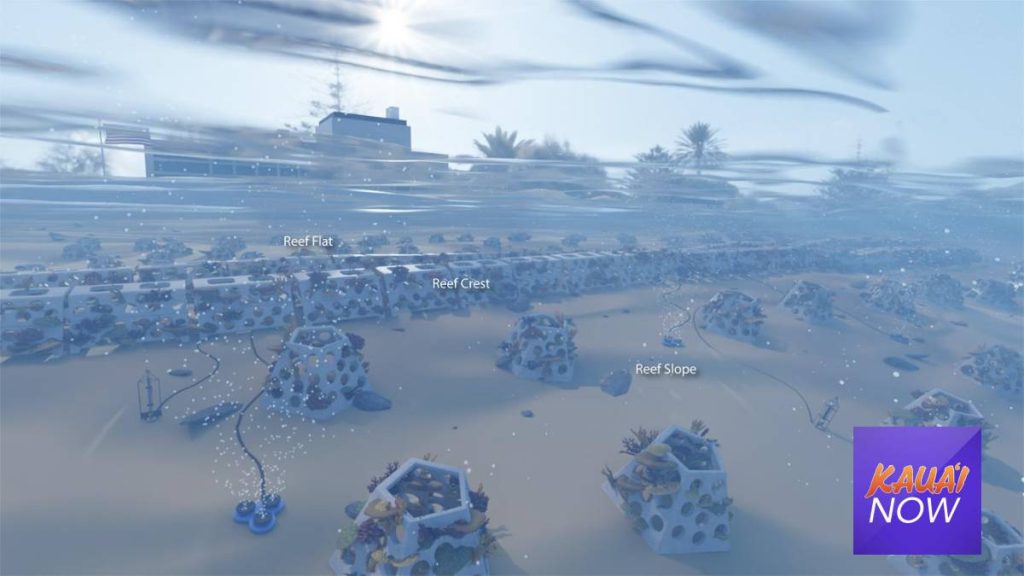 The University of Hawaiʻi is developing an engineered coral reef ecosystem, inspired by natural reefs, to help protect coastlines from flooding, erosion and storm damage.

UH will be awarded up to $25 million from the Defense Advanced Research Projects Agency for the five-year project, which is a joint effort between UH-Mānoa’s School of Ocean and Earth Science and Technology and the UH Applied Research Laboratory. The goal is to create an engineered structure that dissipates wave energy while providing habitat for corals and other reef life.

“The Rapid Resilient Reefs for Coastal Defense project will be the first of its kind by taking an integrated, ecosystem-level approach to design and build a living coastal-protection system,” Ben Jones, the project’s principal investigator and director of Ocean Science and Technology at the Applied Research Laboratory, said in a press release. “This is an immense challenge. We have assembled a team of experts right here in Hawaiʻi who, in partnership with Florida Atlantic University and Scripps Institution of Oceanography, will devise real solutions that will help our community and other communities around the tropical Pacific that are already facing the effects of climate change.”

“This award will enable our world-class experts to develop advanced technology that will have a significant impact here in Hawaiʻi and around the world,” UH-Mānoa Provost Michael Bruno said in the press release. “We are proud to have UH research at the cutting edge of creating a solution to a global problem.”

The new project integrates coastal engineering and hydrodynamics with expertise on coral reef ecology and adaptive biology to enable the team to rapidly develop a living, breakwater system that can adapt to rising seas and increasing ocean temperatures.

“The typical fringing reef consists of a fore reef along the slope, a reef crest that absorbs much of the wave energy and a protected back reef that harbors more delicate species,” Zhenhua Huang, professor of ocean and resources engineering at the School of Ocean and Earth Science and Technology and lead investigator for base structure engineering, said in the press release. “We intend to achieve similar wave attenuation using perforated, thin-walled base structures which are low-cost, efficient energy dissipators. It’s our hope that this project can provide a win-win solution for addressing preservation of nearshore marine natural resources and shore protection.”

“Designing succession modules that attract coral larvae, and then protect them from being eaten or overgrown by algae, is essential for kick-starting a living reef,” Josh Madin, associate research professor in the Hawaiʻi Institute of Marine Biology at the School of Ocean and Earth Science and Technology and lead investigator for ecosystem engineering, said in the press release. “Larvae are really bad swimmers, and so they need to be captured by cracks and crannies in the structure. We will use 3-D design and biofilm chemistry to attract larvae and encourage settlement, while discouraging algae growth. On top of this, we will use sounds that mimic a healthy reef to attract organisms that help coral growth.”

Additionally, the team will explore cost-effective ways to supplement feeding for bleached corals and even actively shade or cool the reef in the early stages of the reef development and during marine heat waves.

“Coral reefs across the planet are declining from the combined assaults of human impacts,” Rob Toonen, Hawaiʻi Institute of Marine Biology professor and lead investigator for adaptive biology, said in the press release. “This project builds on over a decade of research at HIMB into practical solutions for farming thermally tolerant corals capable of withstanding those assaults and rebuilding the reef structure that protects our coastal roads, runways, and neighborhoods.”

The team will collaborate with scientists and engineers at Makai Ocean Engineering on Oʻahu, Florida Atlantic University, Scripps Institution of Oceanography at the University of California, San Diego, and Ohio State University. Additional partnerships will also facilitate various aspects of the project.

To scale up this revolutionary effort, Makai Ocean Engineering, a Hawaiʻi-based company, will handle major construction, anchoring and installation, and an Australian firm, Reef Design Labs, will create flexible, reusable forms to build hundreds of the succession modules.