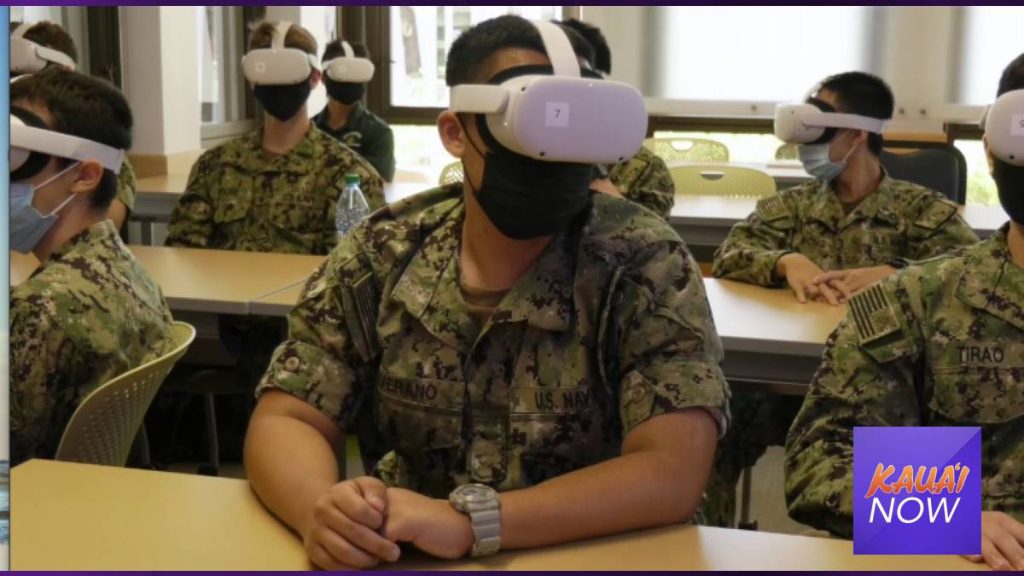 A group of future military leaders studying at the University of Hawaiʻi at Mānoa recently had the chance to learn about the 1941 attack on Pearl Harbor in a different way.

UH-Mānoa’s first cadre of Naval Reserve Officers Training Corps midshipmen, in partnership with Pacific Historic Parks, last month donned virtual reality headsets that brought the attack to to life. As part of their naval history course, the 25 midshipmen were immersed in a 360-degree digital experience of the events of the Dec. 7, 1941, attack.

“I thought it was pretty interesting because it was a new way of learning our history,” said Dylan Yamaguchi, UH-Mānoa NROTC 4th Class Midshipmen. “In the history books, we could read it and imagine it in our minds but the VR headsets actually showed us what it really was.”

The two newly released VRs from Pacific Historic Parks placed them on the deck of the USS Utah, one of the battleships destroyed on that infamous Sunday morning, and also put them in the cockpit of a Japanese fighter plane as it departed the carrier Akagi 230 miles north of Oʻahu and headed for the military airfields and Pearl Harbor.

“I really enjoyed the aircraft because I want to go into aviation, so that whole perspective of kinda getting to look at Japanese and American perspectives while up in the aircraft, I think it was really educational and it was eye opening to experience how the sailors felt that day,” said Kirsten Spillman, UH-Mānoa NROTC 4th Class Midshipmen.

The NROTC midshipmen, who were not born when the 9/11 terrorist attacks in New York, Pennsylvania and Washington, D.C., happened, were able to get a new kind of first-hand encounter experience of the 1941 attack that changed the world. The experience also helped them understand and prepare in the event of a similar attack.

“It’s important for them to see this virtual reality simulation because as the plankowners of Hawaiʻi’s first Naval ROTC Command they need to see what is in their region’s background and their history,” said Lt. Sawyer Smith, UH-Mānoa NROTC Aviation Officer.

The narrated VRs titled “Air Raid Pearl Harbor” and “Skies Over Pearl” run about six minutes each and are currently shown at the Pearl Harbor Virtual Reality Center at the USS Arizona Memorial.

The UH-Mānoa NROTC program’s mission is to develop midshipmen morally, mentally and physically to instill in them the highest ideals of honor, courage and commitment. The program is actively recruiting students locally and throughout the mainland for the 2022–23 academic year.

Established in 2020, UH-Mānoa is the first university to host a new NROTC program in the country since 2016.