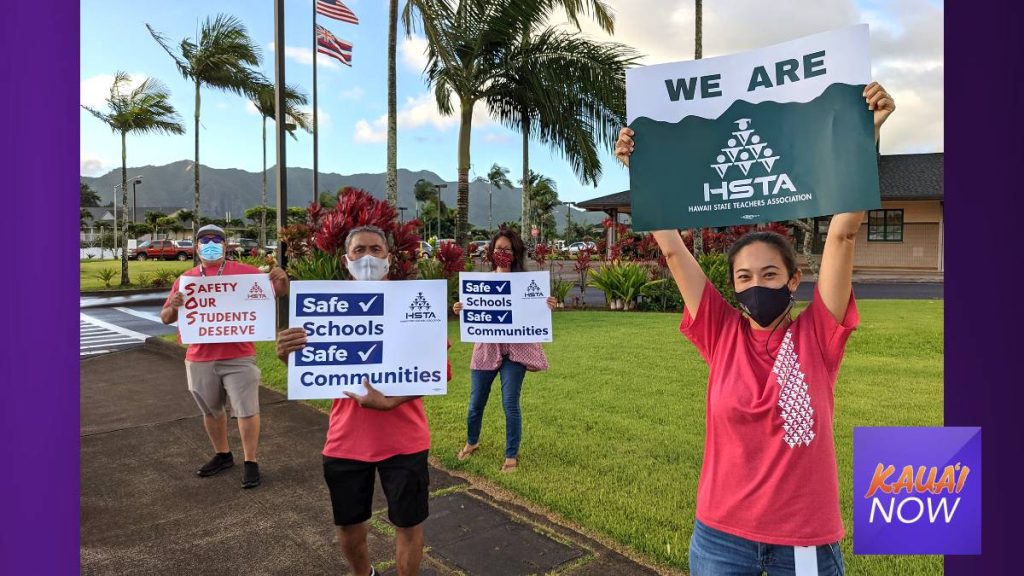 Approximately 20 teachers waved signs for about a half-hour before school outside Chiefess Kamakahelei Middle School in Līhuʻe, Tuesday, calling attention to their concerns regarding the safety of keiki as the COVID-19 pandemic continues to impact their classrooms.

“Each teacher might have had their own reason (to participate),” said seventh-grade science teacher Sarah Kern. “Some people felt strongly that safety protocols are not being enforced consistently within the DOE.”

Hawaiʻi State Teachers Association (HSTA) President Osa Tui, Jr. told Kauaʻi Now Tuesday that members of the union across the state have been holding sign wavings in an effort to raise awareness of the condition of Hawaiʻi’s schools. Teachers from at least four Kauaʻi schools joined in voicing their concerns.

“Weʻre just worried for the safety of our students,” Tui said. “We all need to do our part to keep the transmission level (of COVID-19) down.”

HIDOE officials say schools are doing everything within their control to implement the core essential strategies set by the Department of Health: Promoting vaccinations for staff and eligible students, staying home when sick, consistent and correct masking, and proper hand hygiene.

“When applied consistently and in combination for a layered approach, the mitigation strategies have proven to be effective at quickly identifying cases and preventing further spread,” stated Nanea Kalani Acting Communication Director for HIDOE.

Like many schools throughout the state, Tui said, Kauaʻi teachers don’t feel there is a consistent policy when it comes to identifying COVID-19 cases and close contacts among the student body.

Kern said Chiefess Kamakahelei Middle has been dealing with reports of COVID infections and close contacts several times a week, which have been disruptive to learning. The social studies teacher added there have been no consistent return dates after children come back from quarantine.

There are pockets, Kern added, where schools are successful in enforcing safety protocols but that’s not happening across the board, which she attributes to confusion and lack of clear communication from the Hawaiʻi Department of Education (HIDOE).

“There are so many extra things that are required of school staff and itʻs not in writing anywhere of what’s clearly expected of teachers and district in regards to pandemic response,” she said.

James Dingus, eighth-grade social studies teacher at Chiefess Kamakahelei Middle, also participated in the sign-waving. As a teacher, he said, he would appreciate it if someone from the HIDOE took the time to address what it might look like to close schools.

“It’s a horrible option, but I think it would be wise to take time to figure out (the) really bad scenarios,” Dingus said. “Having some plans for that scenario makes sense.”

Dingus said the ongoing pandemic has created a multi-faceted problem. While safety for the children is a top concern, the lack of substitutes has also been an issue as well as not having enough staff on campus.

“I believe everyone is trying to do their best,” Dingus said, adding, “Iʻm not sure theyʻre (HIDOE) working as smart as they can be working, but when people work together you get better solutions.”

According to Tui, a lot of teachers are reporting there isn’t enough adult supervision especially during breakfast and lunch. While the district does have a list of substitute teachers, the HSTA president said most of the retired teachers aren’t willing to come back in the current conditions.

“Students have been supervised by an administrator in the cafeteria more than I’ve ever experienced it in past years,” Kern said.

Kalani stated to Kauaʻi Now in an email that she doesnʻt believe HSTA’s depiction of substitute teacher shortages is accurate throughout the state. A potential issue, she added, may be around the Department’s employee COVID testing mandate, which applies to substitute teachers. Meaning there are eligible subs to work, but they might not be able to immediately comply with the testing requirement.

“We do not have a shortage of substitute teachers,” Kalani said. “According to our Office of Talent Management, we have a pool of nearly 3,200 active substitute teachers available to teach in schools. Overall, this is sufficient for our current needs.”

HSTA doesn’t want schools to close but, Tui said the union wants to be with students safely and have schools meet the needs of the community. Among those needs is distance learning.

When the pandemic broke out in March 2020, distance learning was the primary form of education for about a year and a half. When school started in August, campuses were open for in-person instruction. However, Tui and teachers say the distance learning options are limited this year, which has left parents frustrated.

In June, the Hawaiʻi Board of Education approved distance learning for one teacher per grade for the entire state. Tui said the offering was thrown together last minute.

“Some schools are able to offer limited distance learning, but itʻs not being coordinated in a central way,” Tui added. “Without flexibility, we are burning through resources.”

Kern said a lot of the teachers feel the HIDOE interim Superintendent Keith Hayashi needs to sit down with HSTA and negotiate a memorandum of understanding (MOU), a document that outlines what is expected of the employees and employers.

“MOU would be the best step in the right direction,” Kern said, adding teachers want to continue in-person instruction. “Itʻs two years and youʻd think weʻd have some form of guidance and memorandum in place.”

The next step, Kern said, would be enforcing safety protocols in the memorandum.

Tui said he is still waiting for Hayashi to sit down with HSTA. As of yet, the district has not engaged in a formal negotiation process which Tui says is a requirement when dealing with changes in working conditions.