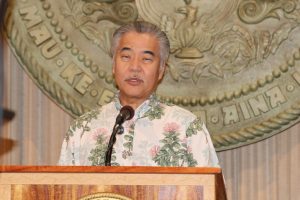 Gov. David Ige held a press conference Monday to discuss the retirements of the heads of two state departments, the use of CARES Act funding as it applies to unemployment benefits in Hawai‘i, and his intent to veto list involving several pieces of legislation passed by the State Legislature this session.

The governor announced the retirements of Department of Health Director Bruce Anderson and Department of Public Safety Director Nolan Espinda earlier on Monday. Both men came under escalating criticism and scrutiny over the last several weeks due to the state’s contact tracing program proving deficient as COVID-19 cases surged in August and an outbreak tore through the O‘ahu Community Correctional Facility infecting more than 300 inmates and staff to date.

Although the timing of the announcements raised questions, Ige said repeatedly Monday that he did not ask either director to tender a resignation due to mounting public pressure for leadership changes within the administration. The retirements come as Hawai‘i’s least effective and deadliest month in its battle with the coronavirus draws to a close.

“I did not lose confidence in Director Espinda or Director Anderson. They did inform me they had decided to retire,” Ige said. “I did not approach them. They did come in to talk to me about retirement. I accepted their resignations.”

The governor acknowledged a loss of public trust in both departments, saying there are plans moving forward to address criticisms, including the reconfiguration of the contact tracing process, which is already underway.

“We are implementing actions to include transparency and accountability in both agencies,” Ige continued. “We are preparing a new dashboard for DOH that will provide some of the many data requested. We will be launching that within the week to provide consistent information.”

Expanded information will include updates on new coronavirus cases, hospitalizations, contact tracing, testing, and other data. More transition activities will be announced as Espinda gets closer to taking his leave next month. More details can be found here.

On July 31, 2020, the governor returned Senate Bill 126 with line-item vetoes. The vetoes applied to the Legislature’s approval of spending more than $300 million in CARES Act funding, the federal stimulus package passed in response to the COVID-19 pandemic.

Of the $321 million that was struck from the bill, Ige said he intends to utilize the funding for the following priorities:

Ige said he’s authorized the distribution of $462 million in CARES Act funding already, all of which must be spent by the end of the calendar year. That funding has been, or is being, distributed to agencies through county governments for programs like rental assistance.

The governor said he vetoed the $321 million in allocations made by the Legislature to allow for maximum flexibility.

That money will be used to provide immediate funding for surge capacity for hospitals, PPP and cleaning supplies for the Department of Public Safety and other departments, public health education, testing for healthcare workers and emergency response staff, statewide isolation and quarantine sites, and funding for state agencies not included in other requests, Ige said.

It will also be spent to help enhance capabilities for public safety in neighbor island facilities. Neighbor islands, should they exhaust funds and need more for specific coronavirus programming, the money will be utilized to support them.

“Remaining funds by end of the year could (be used as) additional funding to unemployment to help (pay) benefits,” Ige said.

Over the weekend, the Federal Emergency Management Agency approved a nearly $200 million grant to Hawai‘i to supplement UI benefits. Plus-up funding from federal coffers had been available through the end of July, adding $600 to each qualified person’s weekly UI benefits check. These weekly payments allowed many in the state to earn more money by not working than by returning to their jobs.

The $600 weekly payments proved a sticking point between Republicans, who wanted to lower it, and Democrats, who wanted to extend it, in an increasingly politicized process to develop a second coronavirus relief package. After talks fell apart, President Donald Trump issued an executive order that allowed states to apply for a program that would fund an additional $300 in benefits weekly for those who remain unemployed.

“We were waiting to see if the federal government would take action to establish a more solid program,” Ige said, offering an explanation as to why the state didn’t apply for the federal UI plus-up program earlier. “The president initiated the (extra) $300 program, but only has access to limited funds. Our intention is to see how far we can get with this program.”

The governor added that he has directed the Department of Labor and Industrial Relations to implement the federal plus-up program as quickly as possible while maintaining its integrity. If it proves necessary, the governor said he will divert funding from the $321 million in line-item vetoes he made earlier this year to bolster the UI program.

On Monday, Ige notified legislative leaders and key lawmakers of his Intent to veto the following six measures, along with the line-item veto changes he made to CARES Act spending as initially approved by the state Legislature.

The Hawai‘i State Constitution requires the governor to notify the Legislature of the bills he intends to veto not later than the 35th day after adjournment, which is Aug. 31, 2020.

On Sept. 15, 2020, any measure that the governor has not signed or vetoed will become law without his signature.

HB 1523 RELATING TO THE DEPARTMENT OF EDUCATION BUDGET

This measure provides funding to the Department of Education utilizing Coronavirus Air, Relief, and Economic Security Act funding to purchase devices for schools with student populations of 50% or greater or reduced-price lunch for the period from July 1, 2020, to Dec. 30, 2020.

Governor’s Written Rationale: This measure is not necessary as the Department of Education has received funds via the Governor’s discretionary funding for this purpose which does not limit the schools that are eligible.

This bill mandates that all State facilities with an area of ten thousand square feet or more (not including Aloha Stadium) implement all cost-effective energy efficiency measures by Jan. 1, 2024; that the State Energy Office be tasked with collecting all utility bill and energy usage data for state-owned facilities monthly and making such information available in a publicly accessible format; and that beginning July 1, 2020, if feasible and cost-effective, designs for all new state building construction must maximize energy and water efficiency, energy generation potential, and use of building materials that reduce the project’s carbon footprint.

Governor’s Written Rationale: The State is already in the process of implementing the energy efficiency changes that the bill addresses. The bill does not clearly define energy efficiency and the word “all” creates a possibly unrealistic expectation that could open the state to lawsuits. Additionally, there are concerns that contractors employed under this legislation will be able to benefit from both the contract paid for by tax-payer dollars as well as tax credits associated with the kind of work done with no assurance that the overall cost of the project will be adjusted appropriately.

HB 2124 RELATING TO THE CODE OF ETHICS

This measure Amends the State Ethics Code to prohibit the governor, lieutenant governor, and other high-level government officials from representing any person or business for a fee or other compensation regarding any legislative or administrative action for 12 months after termination from respective position.

Governor’s Written Rationale: The additional restrictions put on volunteer boards and commissions members who fulfill an important role in protecting our community through their service will make it significantly more challenging to recruit for already difficult to fill positions.

Governor’s Written Rationale: Under the emergency proclamation, the governor already has the ability to take the necessary actions to implement the purpose of this bill. As written, this bill exposes the state to liability.

This requires the Department of Public Safety to expand certain appropriated funds during the fiscal year 2020-2021 for the community-based work furlough program for female inmates.

Governor’s Written Rationale: The measure is not required because the Department of Public Safety is already in the process of awarding a contract to a community-based furlough program. Furthermore, enacting this measure would jeopardize public safety as it restricted the department from expending payroll and operating costs.

This bill establishes a five-year pilot program intended to strengthen government response to domestic violence and increase offender accountability; amends the offense of abuse of a family or household members to provide for a petty misdemeanor offense; allows a deferred acceptance of guilty or no contest plea in cases involving a petty misdemeanor or misdemeanor abuse offenses; requires the court to revoke the defendant’s probation or set aside the defendant’s deferred acceptance of the guilty plea and enter an adjudication of guilt in specific instances outlined.

Governor’s Written Rationale: Currently any person convicted of an abuse offense is prohibited from owning or possessing any firearm. Of grave concern with this bill is that abusers who are granted and complete a term of deferral would not be subject to the firearm prohibition because a deferral is not a conviction. This would allow abusers to own and possess a firearm.