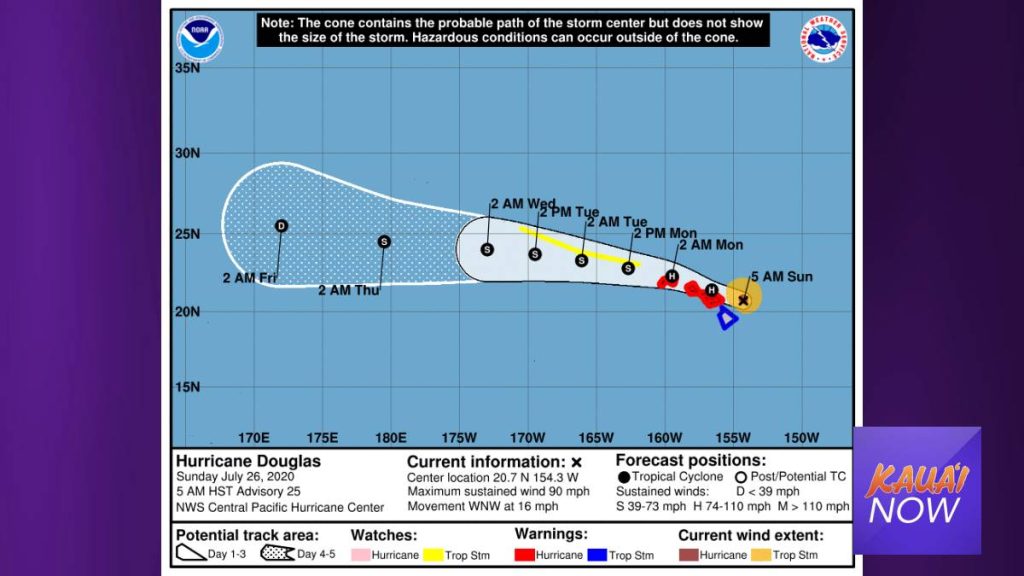 The Hurricane Watch for Maui County, including the islands of Maui, Lana‘i, Moloka‘i, and Kaho‘olawe has been upgraded to a Hurricane Warning.

The Hurricane Watch has been canceled for Hawai‘i County.

A Tropical Storm Watch has been issued for portions of the Papahanaumokuakea Marine National Monument from French Frigate Shoals to Maro Reef.

A Tropical Storm Warning is in effect for Hawai‘i County.

A Tropical Storm Watch is in effect for portions of the Papahanaumokuakea Marine National Monument from Nihoa to French Frigate Shoals to Maro Reef.

A Hurricane Warning means that hurricane conditions are expected somewhere within the warning area, in this case within the next 24 hours.

A Tropical Storm Warning means that tropical storm conditions are expected somewhere within the warning area, in this case within the next 12 hours.

A Tropical Storm Watch means that tropical storm conditions are possible within the watch area, in this case within the next 36 to 48 hours.

Interests elsewhere in the Papahanaumokuakea Marine National Monument should monitor the progress of this system.

At 5 a.m. HST, the center of Hurricane Douglas was located near latitude 20.7° North, longitude 154.3° West. Douglas is moving toward the west-northwest near 16 mph and this motion is expected to continue over the next couple of days. On the forecast track, Douglas will pass near, or over, the islands from Maui to Kaua‘i today and tonight.

Maximum sustained winds are near 90 mph with higher gusts. Gradual weakening is forecast during the next 48 hours, but Douglas is expected to remain a hurricane as it moves through the islands.

WIND: Hurricane conditions are expected in portions of Maui County today, on O‘ahu by this afternoon, and on Kaua‘i and Ni‘ihau tonight. Tropical Storm conditions are imminent across the Big Island. Due to the steep terrain of the islands, hurricane-force wind gusts are possible even within the tropical storm warning area.

STORM SURGE: The combination of higher than predicted water levels, dangerous storm surge, and large breaking waves will raise water levels by as much as 3 feet above normal tides near the center
of Douglas.

RAINFALL: Heavy rainfall associated with Douglas is expected to affect portions of the main Hawaiian Islands from early this morning into Monday. Total rain accumulations of 5 to 10 inches are possible from Maui County westward to Kaua‘i County, with the greatest amounts up to 15 inches in elevated terrain. This rain may result in life-threatening flash flooding and landslides, as well as rapid water level rises on small streams. Douglas could produce an additional 2 to 4 inches of rainfall over the northern half of the Big Island.